Pick the best Fitbit for your needs and your budget based on our testing.

Choosing the best Fitbit for you all depends upon your needs and budget. Fitbit’s devices are some of the best fitness trackers you can buy but range from the $70 Fitbit Inspire to the $329 Fitbit Sense, so it’s important to know what you’re looking for.

What is the best fitbit smartwatch to buy?

All of Fitbit’s devices automatically track activities, steps, and sleep. They’re all water-resistant, come with female health-tracking, and all can receive notifications from your smartphone. And all of them also connect with Fitbit’s excellent app and connect to a massive community of other Fitbit users, whom you can challenge to reach fitness goals.

Some Fitbits have characteristics of the best smartwatches, including advanced features, such as heart rate monitoring, mobile payments, access to an app store, color displays, even built-in GPS and on-screen workouts. Our roundup of the Top Fitbit deals right now can help you score the one you want at a discount, too.

If you’re choosing a Fitbit but looking for a little more detail than just your daily step count, the Fitbit Sense is the device for you.

It’s a fully-fledged health watch, with every bell and whistle you can imagine. It provides more data about your wellbeing than any rival on the market.

There’s also GPS, loads of workout modes, and it will kick your data out to platforms like Strava if you hook them up.

Fitbit has put an added focus on its Fitbit Premium, so subscribers to the $79.99 a year service will get even more data.

Premium reveals a whole dashboard of new raw data called Health Metrics across all devices – but Sense leverages the most. You get the temperature and resting heart rate, breathing rate, oxygen saturation, and heart rate variability all shown on one screen.

If there’s a downside, it’s that there are a lot of graphs, but not a lot of information about what’s happening under the hood, so we’d advise getting yourself clued up on the key metrics.

At the moment, Fitbit Sense has some annoyances – and the on-watch experience is a little laggy, and the wrist-raise is too slow. Hopefully, these get fixed up because you do get around six days of battery life, a seriously rapid fast charge. And Fitbit Pay is on board if your bank supports it.

If you’re looking for a Fitbit, then there’s a new sheriff in town. The Fitbit Charge 4 isn’t just the most potent Fitbit tracker we’ve seen to date, but one of the most potent fitness trackers full stop.

Most of the race for health innovation is now played on smartwatches, so the whole gamut of features in wrist-band form is now pretty unique. GPS is a significant new addition, offering accurate tracking of runs and cycles from the wrist. The Charge 4 also has a SpO2 sensor for blood oxygen, monitors VO2 Max, resting heart rate, and boasts Fitbit’s brilliant sleep tracking smarts as well.

It’s swim-proof with 5ATM water resistance and will track and tag data from 20 sports, from HIIT and yoga to general workouts (although just essential calorie, HR, and duration data).

The Fitbit Charge 4 certainly sets out its stall as an excellent device for those who like to work out, do HIIT, living room workouts, gym classes, and the odd run. If you’re 10,000 steps a day person, it’s overkill, and committed runners will crave more detail on progression. But it’s an OK update to the Charge 3, although we do wish Fitbit has worked on the screen, which looks pretty dated these days.

With the inclusion of the SpO2 sensor, the Charge 4 is also one of the Top Fitbit devices for sleep tracking. It has Sleep Stages, Sleep Insights, Sleep Score, and Estimated Oxygen Variability – all metrics that far outweigh the rest of the competition.

While the Fitbit Sense has stolen the show as the company’s flagship smartwatch, the Versa 3 is here for those that don’t want to pay big money for features like ECG and stress.

The Versa 3 is a solid update to the previous version, adding GPS for outside tracking of workouts.

It also gets the upgraded PurePulse 2.0 HR sensor, which should be more reliable but still struggles at very high intensity.

As a smartwatch and fitness tracker, the basics are the still same – with heart rate, steps, sleep tracking all done within the Fitbit app. The SpO2 sensor is now live, too, adding insights into Estimated Oxygen Variability, as well as Sleep Score, Sleep Stages, and Sleep Insights.

You still get Alexa is chief among these, where a button press will summon Amazon’s voice assistant for alarm setting, timers, and quick check-ins on your goal progress – if you like that sort of thing.

The launch of the Fitbit Inspire 2 is a minor update to the Inspire HR, but a better screen and the new Active Zone Minutes feature to make it a no-brainer at the same price.

The slimline, dainty activity bands are perfect for smaller wrists, yet they still manage to boast a relatively big touchscreen display. What’s more, they’re also waterproof, offering some basic swim tracking – making it more versatile than its predecessor, too.

It covers the usual fitness tracking bases, with the Inspire HR unlocking features like Sleep Stages, guided breathing, and training with heart rate zones. You also get the goal-based exercise modes from the Charge 4 and SmartTrack tech to automatically recognize when you’re working out.

There’s notification support here, but that’s as far as the smartwatch features go. There’s no third-party app support, either, but you do get a decent handful of watch faces to choose from.

It’s a feature-packed fitness tracker that, crucially, doesn’t come at a great expense. This is now Fitbit’s cheapest tracker range, whether you go for the Fitbit Inspire or the Inspire HR. 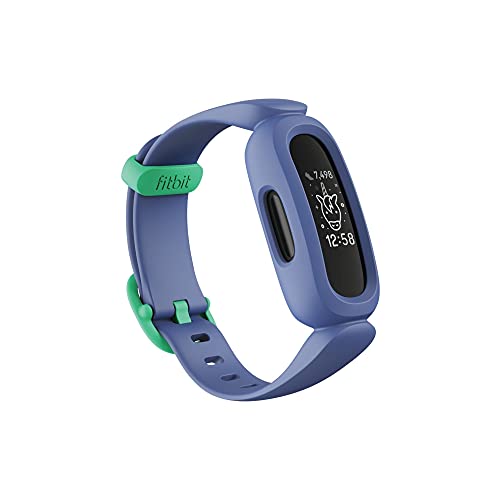 The Fitbit Ace 3 is aimed at kids aged six and up, with the latest generation featuring a modular design that utilizes a bumper to keep the display a little more protected as kids run around and play.

The Ace 3 puts move reminders at its core, reminding kids to get those 250 steps per minute on their way to 60 minutes of active time per day.

It’s still a monochrome display, so no color options here. And the main features are still step tracking, sports monitoring, and sleep insights.

There’s no heart rate monitor, but it does boast swim-proof 5ATM water resistance.

There are also bedtime reminders and silent alarms to help parents get a settled sleep schedule, and there are also timers and race stopwatch features built into the watch.

The more extensive tracker also means a boost in battery life, and it will now last eight days between charging, up from 6 days on the previous generation.

How to choose the best Fitbit for you

If you spend more time than you wish to disclose on your butt watching TV and want to start down the path to a healthier lifestyle, a basic tracker that costs less than $100 will most likely suit your needs.

The Inspire HR has a heart rate monitor, so it can be used to track not just your heart rate and cardio fitness, automatically start tracking workouts and give you insights into your sleeping patterns. It has 15 goal-based fitness modes and can be connected to your smartphone’s GPS to track your runs more accurately.

For those who work out more frequently, the Fitbit Charge 3 might better suit your needs. This band has all of the same features as the Inspire HR but comes with a larger OLED touchscreen display, making it easier to see notifications and health data at a glance. It also has NFC built-in so that you can use it for mobile payments via Fitbit Pay. The Charge 3 also has a slightly longer battery life of 7 days. However, the Blaze didn’t wow us in our review because it lacks in the features department compared to smartwatches, and its screen doesn’t always stay on. We’re also not fans of the charging cradle.

Those looking for more of a smartwatch-style fitness tracker should check out the Fitbit Versa 2. This device has a square, color touchscreen that can be used with Fitbit’s small but growing app store. It lacks has built-in GPS—you have to connect them to your phone for that.

The Fitbit Ionic is Fitbit’s only device with on-board GPS, which means you can leave your phone at home and still get an accurate map of your workout. Like the Versa, it offers an app store, NFC chip for mobile payments, and music storage. The Ionic has sleep analysis and pretty good battery life; its design is lacking, it’s a solid fitness watch.

How we test Fitbits

By wearing them, of course! When Fitbit comes out with a new fitness tracker or smartwatch, we fully charge it up, then strap it on our wrist for about a week to test out all its features.

First and foremost: How does it feel? Some fitness trackers are pretty bulky, which means they won’t fit comfortably on smaller wrists. Next, we look at its fitness features, such as its heart rate monitor and, where applicable, its GPS. How accurate are both sensors?

We also look at the other Fitbit features, including sleep tracking, female health-tracking, mobile payments, and smartphone notifications.

We also look at Fitbit’s battery life claims and compare them to our actual use. Some sensors chew up juice faster than others, so if you’ve got the screen on constantly or are always using the heart rate monitor, your mileage may vary.

Best Fitness Smartwatch participates in the Amazon Associates Program, an affiliate advertising program designed to provide a means for sites to earn commissions by linking to Amazon. This means that whenever you buy a product on Amazon from a link on here, we get a small percentage of its price.